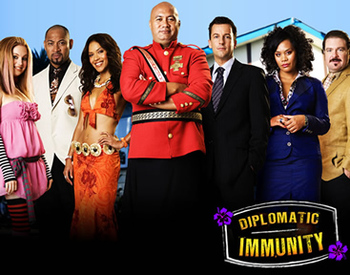 "We are at war. Freeze frame, roll credits, to be continued. War!"
— Jonah
Advertisement:

Diplomatic Immunity is a comedy about the New Zealand consulate of the fictional Most Royal Kingdom of Fe'ausi. The island kingdom itself is known for having "the highest standard of living in the South Pacific" thanks to its rampant corruption. The staff of the consulate, including ambassador Jonah Fa'auigaese (the brother of the king) and other relatives Mick, Malepe, and Suga, are unsurprisingly willing to bend or ignore rules, much to the dismay of their diplomatic attaché Leighton. Rounding out the main cast are Jonah's daughter Leilani, the kingdom's only anti-monarchist activist, and Kirsty, who appears to be the only one who does any legitimate work.

Not to be confused with the trope Diplomatic Impunity, although the Fe'ausians do take advantage of that whenever they can.