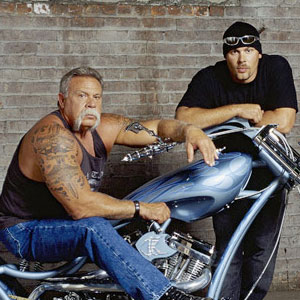 Started out in 2003 as a Docu Soap on the Discovery Channel about the Orange County Choppers bike shop, ran by Paul Teutul and his sons Paul Jr. and Mike. They built bikes; they argued. And at times, they just goofed off.
Advertisement:

Then, the unthinkable happened: Sr. fired his son from the company, which ultimately led to the show's apparent Cancellation. But what seemed like the end of the saga, turned out to the beginning of a sort-of new series, American Chopper: Senior vs. Junior. This continuation had a similar formula, but this time, the arguments between father and son are Serious Business. As in, Paul Sr. did everything he could to put the workshop of his son, Paul Jr. Designs, out of business. It ran for four seasons in this format and then ended in a Grand Finale with Sr. and Jr. deciding to abandon their business relationship in order to save their familial one.

In November of 2013, ads began appearing for a new program, Orange County Choppers on a different network, featuring Paul Sr. At this point, expectations are for more or less a continuation of American Chopper.

In 2018, the show Discovery Channel began airing all new episodes. While they have mellowed out and patched up some of their differences, There is still enough drama to continue making an interesting show.