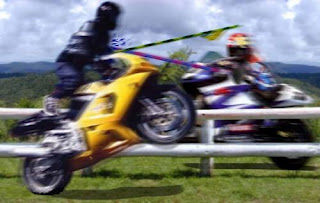 Motorcycles are often treated as the modern day equivalent of horses. Some works take this an extra step and have the protagonist engage in jousting from the back of a motorbike.

Do Not Try This at Home unless you are on a closed stunt course and are trained in stunt riding and are either left-handed or have a modified brake. Waving or pointing an object, especially if you're right-handed, means taking your hand away from the handbrake, which is often in and of itself a lethally stupid idea. (Unlike motorcycles, horses can be commanded to stop or slow down verbally as well as via the reins, and reins can be held in either hand. Unless a motorcycle is modified, its handbrake is on the right hand, and until voice command technology improves, a vehicle cannot be commanded to stop or slow down via voice.) If you attempt to "joust" a motorbike without proper training, the bike will most likely flip over and crush you underneath it.

Left-handed people or a specially wired handbrake can prevent that, but holding out or waving a long object can also cause your bike to become unbalanced or the object to catch on something - which will also often cause a crash. Note the Darwin Award winner and the guys that managed to crash each other in the examples...