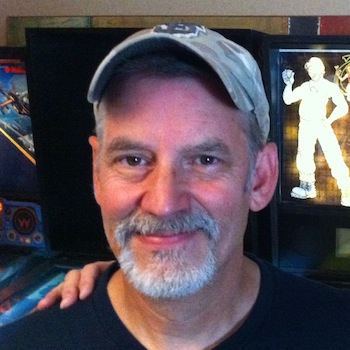 Mark Ritchie (born August 20, 1958) is an American Arcade Game designer who is best known for his Pinball games.

Ritchie started off working for Atari in 1976 as a game assembler, but was soon transferred to be a production line lead for their pinball division. He was later promoted to prototype specialist in Atari's pinball engineering group, where he learned the business of pinball development. In 1979, Ritchie was hired by Williams Electronics as a prototype specialist; his first original commercial pinball game was Sorcerer, released in 1985. Ritchie went on to develop a dozen games for Williams, including pinballs like Taxi, Fish Tales, Diner, and Indiana Jones: The Pinball Adventure, as well as two baseball "pitch-and-bat" novelty games.

Mark Ritchie left Williams in 1993 to join Capcom's new pinball division, where he led the development of five pinball tables. Williams sued, claiming Ritchie violated his contract's non-competitive clause, but the case dragged on for years and was rendered moot when Capcom closed its pinball division in 1996. Ritchie then started his own game design firm, Ritchie Design, Ltd., and joined Incredible Technologies a year later, where he produced Big Buck Hunter and a Digital Pinball Table based on Orange County Choppers.

Today, Mark Ritchie works at Raw Thrills/PlayMechanix, the arcade game company led by Eugene Jarvis. He currently works as a producer and production coordinator, and is involved in developing numerous coin-operated games. Oh, and he is the younger brother of fellow pinball designer Steve Ritchie.

Games designed by Mark Ritchie include: