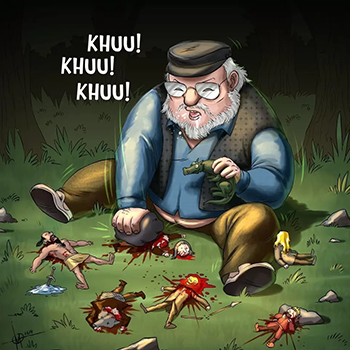 "In writing, you must kill all your darlings."
Advertisement:

In most series and certain genres, you can expect a few people to die: Murder mysteries start with a death every episode, action series usually have at least one per fight scene, and war movies always have lots of redshirt deaths.

Then there are the works that are known for the high body count. Characters die early and often. This trope is typically used to establish a dark and gritty setting or to enhance realism in works that are set in dangerous situations such as wars or extreme jobs. In the very darkest of such stories, the question in effect is not "who will die?", but "who will survive?"

Compare Anyone Can Die, which is when no particular character is safe. Contrast Kill 'Em All, where no one—or at most a bare handful of characters—survives to the end.

Note that this does not count for series where Death Is Cheap, or millions of nameless characters die off-screen.