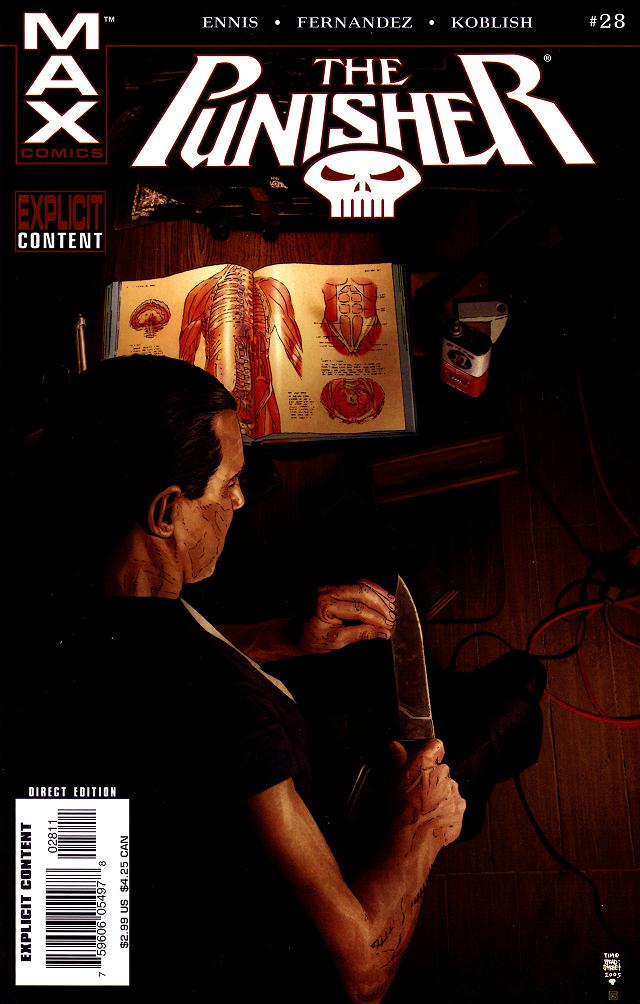 Trust us, the guy Frank's studying up for really deserves what's going to happen to him.
"It's Omaha Beach. Wounded Knee. Rorke's Drift, The Killing Fields, the first day on The Somme. World War Three in North Jersey. And only now, pouring automatic fire into a human wall — do I feel something like peace."
— Frank Castle, The Punisher #1 (2004)

Much like the original comics, the MAX imprint version of Frank Castle became a vigilante when his family was gunned down by mobsters in 1976. What sets him apart from his mainstream counterpart is that this version, written almost exclusively by Garth Ennis for four years, features no superheroes and is deeply rooted in more disturbing forms of crime and horror — including but not limited to: The Mafia, Irish terrorist cells, Eastern European slavers, corporate tycoons and real life wars. It is also considerably less funny than the mainstream Marvel series, though there are touches of dark humor here and there.

The Max series is written much more consistently than the mainstream version, due to being almost entirely shaped by Garth Ennis' vision of the character. This series is also notorious for its moral absolutism, which readers either loved or hated.

Beginning in February 2016, to coincide with the character's resurgence in popularity (thanks in no small part to the character being featured in season two of Netflix's Daredevil TV show), the series is now being released in Complete Collection format, making it the perfect way for new readers to discover the series.

Feel free to check out the Character Sheet. Contributions are greatly welcomed.

open/close all folders
A to C
D To G
H To M
N To R
S To Z
"The essential American soul is hard, isolate, stoic, and a killer. It has never yet melted."
— D.H. Lawrence, Studies in Classic American Literature