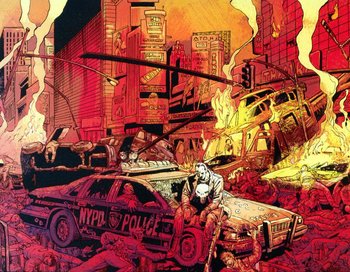 Don't worry. It's all just a dream. It's all just one bad dream...
This being a Darker and Edgier alternative continuity based off of what was already one of Marvel's darkest and edgiest characters, it should come as no surprise that this series has no shortage of material that will keep you up at night.
Advertisement:

Spoilers below. You've been warned.

Up is Down and Black is White