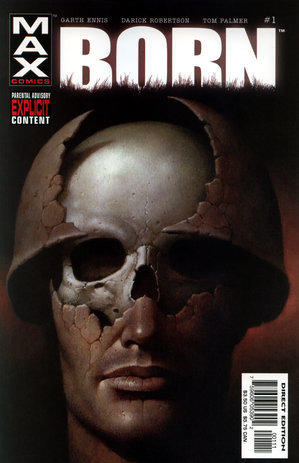 This war has bred a saying, oft-repeated: "Payback is a motherfucker". At Valley Forge we have another. "If you think payback's bad — You haven't met Frank Castle."
Advertisement:

Born is a four-issue miniseries from the year 2003, which was released through Marvel's MAX imprint.

The story, set in October 1971, depicts Frank Castle's last days in The Vietnam War, where he leads a platoon of soldiers that operate from Firebase Valley Forge. While everyone else waits for U.S. troops to be pulled out from the unpopular conflict, Castle clings to the war, willing to do anything to keep on fighting.

Originally the comic was written to be in canon with the regular Marvel books, but it later became the starting point for The Punisher's alternate MAX continuity.