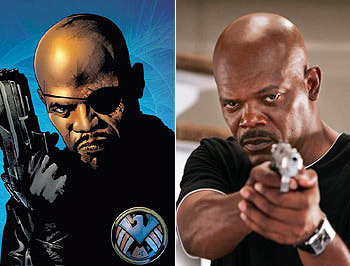 A rare case in which the real-world subject used as a template for the character eventually became actual Comic-Book Movie Casting.
Hank Pym: Who do you think they could get to play you [in a movie], Nick?
Nick Fury: Why, Mr. Samuel L. Jackson, of course. That's not even open to debate, Dr. Pym.
— The Ultimates
Advertisement:

Sometimes in comics or animated shows, a character is made to look like a particular actor or other celebrity whom the artist imagines playing the character. This might be out of admiration for the actor because the character fits with the actor's well-known roles, or in the hope that the actor would be flattered and try to get the comic adapted as a movie. Or it might be unconscious on the author/artist's part.

Fantasy casting can also occur in non-visual media such as (non-illustrated) novels but can be harder to spot unless Word of God acknowledges it, or the character is closely based on a particular role the actor is associated with.

If the resemblance is outright stated in the text, it's Textual Celebrity Resemblance. For when the character is a direct impression or parody of a celebrity's public persona, see No Celebrities Were Harmed. For when an animated character is designed to resemble the real-world voice actor, see Ink-Suit Actor. See also Hypothetical Casting, for where creators do this as Word of God without making it explicit in canon.