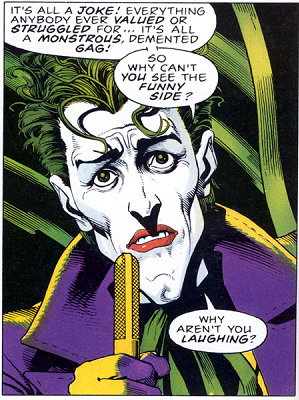 "Because I've heard it before... and it wasn't funny the first time."
"In some remote corner of the universe, poured out and glittering in innumerable solar systems, there once was a star on which clever animals invented knowledge. That was the highest and most mendacious minute of 'world history' - yet only a minute. After nature had drawn a few breaths the star grew cold, and the clever animals had to die."
— Friedrich Nietzsche, On Truth and Lies in an Extra-Moral Sense
Advertisement:

The Straw Nihilist (also known as the Straw Pessimist) is an extreme version of The Cynic and a specific type of The Philosopher who delivers Despair Speeches and Breaks People by Talking about Life, The Universe, and Everything (or at least how meaningless it is to fight for any of them), often Chewing the Scenery about how the hero/audience lives on an Insignificant Little Blue Planet and morality never existed in the first place. Often Above Good and Evil, due to the Straw Nihilist's Armor Piercing Questions about "What Is Evil?".

The basis for the Straw Nihilist is usually extreme scientific empirical materialism: we're all nothing but matter and energy and eventually the universe is going to die as if we never existed, so what's the point in trying to hope and fantasize in a world full of suffering and destruction where morality is dictated by force? Your consciousness is merely an electrochemical reaction inside a dying chemical reactor called the brain which, out of animalistic instincts to protect itself from pain, creates the illusion of meaning and significance in a reality that has none. Good, evil, morality, and thought are nothing but illusions, with no absolute standard in the universe by which to prove their absolute existence as immutable physical laws.

These are one of the inhabitants of the cynical side of the Sliding Scale of Idealism Versus Cynicism. Their ability to play existential mind games and force the audience into ethical dilemmas make them a popular sage in the Ontological Mystery genre, Existential Horror, and amoral Crapsack Worlds such as the Cosmic Horror Story. Sometimes they serve as Mr. Exposition, sometimes they do have a justifiable point in their ramblings while other times, everything they say is a Fauxlosophic Narration or even a Red Herring, or they're a mix of all of them. But if done badly, they can end up looking like a gratuitous scene of Wangst, making people only get puzzled on why they haven't been Driven to Suicide yet.

The Straw Nihilist's behavior is often expected to be like that of The Hedonist or The Sociopath, since, if he doesn't subscribe to morality, he has no restraint in pursuing his instinctual desires. Hedonism can serve as a justification on why he has not killed himself yet, because he's having too much fun (even though this contradicts their message of life being worthless). In more straightforward Science Fiction and Fantasy stories, they are usually Chaotic Evil villains who are always preaching hate and plotting destruction, and can get really over the top in their behavior. They also often use No Good Deed Goes Unpunished, Being Good Sucks and Go Mad from the Revelation as Freudian Excuses on why they have a nihilistic outlook on life.

We use "Straw" as part of the title because it's a stereotype that rarely applies to real nihilists. Note that nihilism in its simplest form is the belief that life is without objective meaning, purpose, or intrinsic value. However, the conclusion that life has no meaning does NOT automatically cause someone to commit suicide or go insane. Indeed, most philosophers who specialise in the subject are rather neurotypical instead of the self-harming and/or psychotic types often portrayed in fiction, and it is possible for one can have a nihilistic outlook on the world at large, and still adhere to personal moral values. See The Anti-Nihilist for examples of such subversions.

Hollywood Atheist is a similar stereotype leveled against any people who don't believe in God or religion, assuming that they are all nihilistic (and by this trope, therefore amoral) by default. Compare the Übermensch, The Social Darwinist, and The Fatalist. Contrast The Anti-Nihilist, who also thinks life has no inherent meaning yet reaches inverse conclusions about morality and the value of life. See also The Unfettered—what they end up as because of their dedication to their philosophy—and Virtue Is Weakness, who believes that morality is a flaw rather than pointless (though some villains believe both).

This trope mostly applies to a negative portrayal of existential nihilism. For an approximation of moral nihilisim, see Above Good and Evil and Blue-and-Orange Morality.

WHY DO YOU PERSIST?!

After knocking Neo down, Agent Smith becomes more emotive than usual, by ranting out just how much of a detriment humanity is and how their ideals and emotions are nothing more than fabrications in an attempt to justify themselves, concluding with Smith angrily shouting why does Neo choose to carry on.

WHY DO YOU PERSIST?!

After knocking Neo down, Agent Smith becomes more emotive than usual, by ranting out just how much of a detriment humanity is and how their ideals and emotions are nothing more than fabrications in an attempt to justify themselves, concluding with Smith angrily shouting why does Neo choose to carry on.