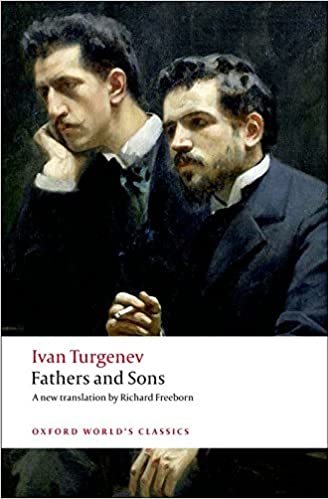 "Every single man hangs by a thread, a bottomless pit can open beneath him any minute, and yet he still goes on thinking up unpleasantness for himself and making a mess of his life."
Advertisement:

Fathers and Sons is a 1862 book by Ivan Turgenev. It is the last in the row of his several important works and is considered to be his most significant full-length novel.

Its main hero, Evgeny Bazarov, is a Straw Nihilist and probably the first example of this trope. The main distinguishing feature of Bazarov is that he denies everything. He proclaims that no things are significant at all.

This general attitude enters in contradiction with his job as a doctor and a researcher. Also while Bazarov is implied to be a revolutionary, he only denies things, rejecting any positive values. While being a revolutionary logically means condemning only the current conditions (in the 1862 those set by the repressive Tsarist regime), however that same revolutionary should be very keen on the ideas of freedom and revolt and have high hopes for the society that be. Bazarov lacks it all, he always denies everything, never offering a constructive (or even destructive) program. Most probably Turgenev could not depict an overt revolutionary as the Tsarist censorship would not give his book a pass then, Therefore the author disguised him as a mere "nihilist". Still it muddled the message of the book and its hero.

Other characters of the novel include the members of the Kirsanov family whose estate Bazarov is visiting. Also appear several of Bazarov’s fellow nihilists who are definitely comical caricatures.

The book did not find favour with the upcoming progressive flank. Turgenev was accused of drawing a caricature of a revolutionary in the caracter of Bazarov (to say nothing of the other nihilists). Young activists launched a backlash against the author, in the aftermath he quit Russia and settled in France.

Fathers and Sons contains examples of the following tropes: