Film / We Need to Talk About Kevin 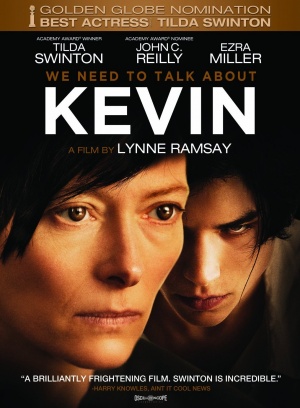 "There is no point. That's the point."
— Kevin Khatchadourian
Advertisement:

We Need To Talk About Kevin is a 2011 psychological drama thriller film based on the book of the same name written by Lionel Shriver in 2003note This film is not the first adaptation of the story; a radio adaptation was made in 2008, directed and co-written by Lynne Ramsay. It stars Tilda Swinton, John C. Reilly, and Ezra Miller, and was additionally scored by Radiohead's Jonny Greenwood.

Eva Khatchadourian (Swinton) never really wanted to be a mother — and certainly not the mother of Kevin (Miller), the unlovable boy who, on a spring Thursday in 1999, three days before his 16th birthday and a few weeks before Columbine, killed 10 people in his school's gym.

Now, two years later, it is time for her to come to terms with marriage, career, family, parenthood, and Kevin's horrific rampage in a series of startlingly direct correspondences with her estranged husband, Franklin (Reilly). Uneasy with the sacrifices and social demotion of motherhood from the start, Eva fears that her alarming dislike for her own son may be responsible for driving him so nihilistically off the rails.

This book and the film based on it provide examples of:

Tropes only included in the book:

Alternative Title(s): We Need To Talk About Kevin