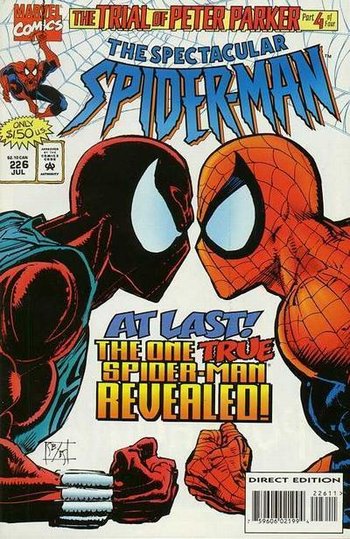 I think I'm a clone now
There's always two of me
just a-hangin' around
Advertisement:

The Clone Saga (or Spider-Clone Saga) is the name of a story-arc that ran in multiple Spider-Man titles in 1994-1996. It is technically a sequel to an earlier story but it is far better known and proverbial than the original story, and when people talk about "The Clone Saga", they are largely talking about the story published in The '90s.

After Ben's death, the mantle of the Scarlet Spider was inherited by many others, whose adventures are covered here.

Tropes associated with the Clone Saga: