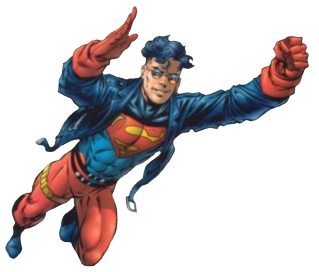 "I'm not wearing one of those damnfool spandex body-condom things. I haven't got the bust for it."
— Jenny Sparks, Stormwatch
Advertisement:

Superheroes who couple a typical Cape's outfit with mundane clothes such as jeans and sneakers. This may also be an attempt to keep a classic design but update (or obscure) an otherwise flashy outfit.

The most prominent example is jackets, and most of the characters who wore them were originally the younger set created in the early 90s. Marvel Universe characters are especially notable for this, although the first popular character to do so may have been The DCU's Animal Man.

This page may also contain examples of characters who identify as superheroes but do not wear a typical costume of any kind, as Not Wearing Tights is a different trope entirely. (This type, such as the quoted Jenny Sparks, tend to have a set civilian outfit that does the same job.) See Coat, Hat, Mask for the minimum amount of spandex needed for this trope to apply. Also, Spandex, Latex, or Leather for other issues involving costuming.