Witch with a Capital "B" 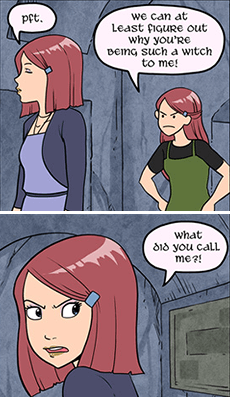 Mr. Lundie: They were indeed horrible destructive women. I dinna suppose you have such women in your country?
Tommy Albright: Witches?
Jeff Douglas: Oh, we have 'em. We pronounce it differently.
— Brigadoon
Advertisement:

A Sub-Trope of Parenthetical Swearing, this is a line of dialogue which may be used for Getting Crap Past the Radar, or that at least always leads to many raised eyebrows and jokes amongst the online fandom. Basically, Bob calls Alice a "witch." The context and inflection, however, strongly imply that, in a world free of Media Watchdogs and censors, he would have used a different epithet — one that rhymes with "witch" but starts with a B. Extra fun if it's justified with the subject being a literal witch or, conversely, the speaker being a female dog (who wouldn't use a word that means "female dog" as an insult). More adult-oriented works tend to do the opposite: wherever the word for a magic-using crone would suffice ("wicked witch", "witchcraft"), they'll go for the swear.

And this is not just in English...Spanish-speakers may like to use "bruja" as a polite form of "puta."note  It varies by country. For some Latin countries, calling a woman a "bruja" means a mean lady or even insult her appearance. Yes, this includes "hijo de bruja." Be warned, however, calling a girl a "bruja" could imply that she is more "a woman of ill-repute" whereas calling a girl a "witch" would simply suggest she is "not a very nice lady."

Most prevalent in Western Animation. See also This Is for Emphasis, Bitch!, which can be used to set up this trope. It's often used when bowdlerizing a work for broadcast, in places where people in the version seen in videos, movie theaters, or CDs do say "bitch."

Also a Genius Bonus, "beldam" is an archaic word for "witch."

And this is after Dorothy called Miss Gulch a "wicked old witch" in regards to her desire to take Toto away to be destroyed.

Half-amusingly, Bill absently calls the woman a bitch immediately after Gary's done with his tirade.

Heck, even the music video does more, as there is one kid who writes on the blackboard "Learn to divide, witch" and even shows a LITERAL actual witch portraying the Wicked Witch of the West!

When Lilith insists that she just wants to talk to her, Luz responds by yelling "Talk to the glyph, witch!" before attacking her. Despite the show's TV-Y7 rating, it's very clear what Luz meant when she said that.

When Lilith insists that she just wants to talk to her, Luz responds by yelling "Talk to the glyph, witch!" before attacking her. Despite the show's TV-Y7 rating, it's very clear what Luz meant when she said that.