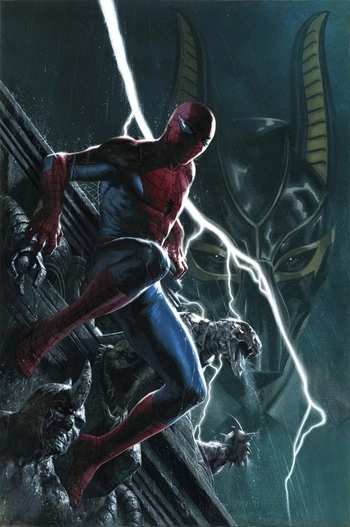 Dead No More: The Clone Conspiracy (formerly Spider-Man: Dead No More) is the 2016 Bat Family Crossover for the Spider-Man series of titles and a part of Marvel NOW! (2016). The story is set to tie up a number of plots started up since the early days of writer Dan Slott's tenure as Amazing Spider-Man writer.

Miles Warren, the infamous Jackal, is back in business with cloning again. This time, however, instead of trying to create weapons of sorts to defeat the web-slinger once and for all, he's doing something new: cheat death. Having already resurrected the wife of the original Rhino and the family of the Lizard, he opts to do more with others... if they're willing to bow over and help him. This looks like a job for Spider-Man, but when someone close to him dies, should he?

The storyline kicks off with a series of prologues in The Amazing Spider-Man #16-19 that lead into a five issue mini-series, tie-in issues within Amazing and Silk, and a spin-off starring the Prowler.

Dead No More: The Clone Conspiracy provides examples of: