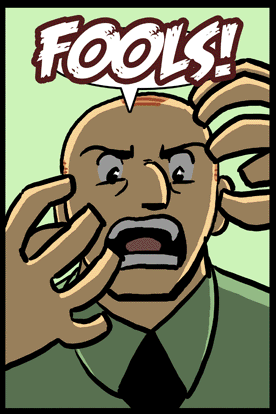 Fools? But it's nowhere near April 1st.
"You fool! I have been trained in your Jedi Arts by Count Dooku!"
— General Grievous, Revenge of the Sith
Advertisement:

The word "fool". Try it out. When someone disappoints you or does something stupid, throw the word out. C'mon, give it some gusto. You fool! You...(deep breath, now) FOOL! Got the hang of it yet? No? It just sounds silly in real life? Well, get used to it, because fiction? Fiction loves this word. It's the ultimate insult. Every villain, so it'd seem at least, uses it, every hero with a hasty friend uses it... hell, if we were to list every example we could find, that would take up too much webspace. It's so common. Only really prominent examples should be listed. The term's use is much like crocodilians - they've existed for quite some time, are known to snap at many a thing around them, and show little to no signs of being uncommon or of disappearing.

The term "fool" could indeed refer to a jester, who was there to joke and otherwise act inane before a ruler or public gatherings. Interestingly, we may have the Hays Office's old Production Code to thank for this. In the olden days, most mainstream works couldn't use profanity. How to show that your villain is one bad dude when his language is carefully scrubbed with bleach? Well, according to The Bible, whoever says "You fool!" is liable to fiery Gehenna. (Matthew 5:22)note "Fool" is used for the Greek word moros, which can also be translated as "godless" or "heathen" - a possible interpretation of the verse is that if you tell others they will go to Hell, you deserve to end up there yourself. Thus, having your villain call his rival a fool allowed the audience to know that this guy was bad news without resorting to using any verboten words.

This also serves to elevate the villain above their underlings (and often the hero as well), since most "Fool!" users tend to be characters of a higher social class/state of being. In other words, the villain is simply above the use of such vulgar colloquial terms as "idiot," "moron,"note  which, ironically, is derived from the above moros or "stupid dumbass."

Not really related to The Fool or Silence, You Fool!, despite the similar names.