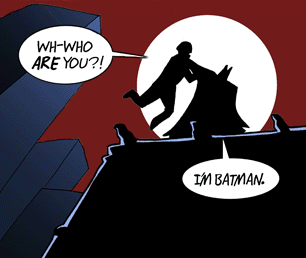 The Hero has burst into the scene, has saved the girl, and is holding the villain at sword/gun-point. The villain (or maybe some other bystander), bewildered, demands "Who are you?" The hero usually responds with a Badass Boast, although a big monologue is not necessary. Sufficiently awesome heroes can get away with just their name, which is especially effective if it's the first time the audience is hearing it, or the first time the character has referred to himself by that name. A common subversion is when the boast is interrupted. If the hero's actions are especially amazing, the villain may demand, "What Are You?" instead.

Precision F-Strike is sometimes employed when asking the question. Can also overlap with Who Dares?.

The Unknown Rival can expect to hear this many, many times.

Not to be confused with the ridiculously awesome song and album by The Who, or with the Korean Drama Who Are You?

Then the guards start laughing, as the convoy was a trap set by the Sheriff of Nottingham.