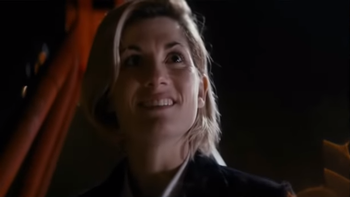 The Doctor has her "Eureka!" Moment, and just in the nick of time.
Click here to see the Radio Times magazine poster for this episode: 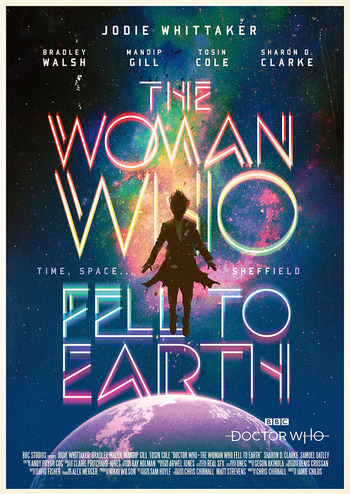 It's time for the Thirteenth Doctor to rise and save the world once more.
Tim Shaw: Who are you?
The Thirteenth Doctor: Yes! I'm glad you asked that again. Bit of adrenaline, dash of outrage, and a hint of panic, knitted my brain back together. I know exactly who I am. I'm the Doctor. Sorting out fair play throughout the Universe. Now please, get off this planet while you still have a choice.
Advertisement:

The one where a guy throws a bike off a cliff, plus something that's Exactly What It Says on the Tin.

This is the first episode of Series 11, introducing Jodie Whittaker's Thirteenth Doctor. It premiered on October 7, 2018. Written by Chris Chibnall and directed by Jamie Childs.

We open on young Ryan Sinclair on a YouTube vlog, where he says he'll tell us all about the most amazing woman he's ever known. It all begins with the fact that, at nineteen, he can't ride a bicycle (though this is due to his having dyspraxia, a neurological condition which causes — at best — poor coordination). Scene change to his grandma Grace and her second husband, Graham, trying to teach him to ride (over rough ground near a cliff). After falling, Ryan chucks the bicycle over the edge and into the woods below. And since Nan and Graham's train is leaving soon, it's up to Ryan to go retrieve the bike. Just as he finds it hanging in a tree out of reach, a pattern of light appears in the air nearby, with a glowing button in the centre, which Ryan of course touches. The lights disappear, and a giant Hershey's Kiss appears on the ground nearby. Which Ryan also touches. It's burning cold. Ryan calls the police. Probationary Officer Yasmin Khan, an old schoolmate of Ryan's, shows up and is initially disdainful of his claim that the pod just appeared, ordering him to remove it before he convinces her he didn't put it there.

Meanwhile, a mechanical thing that looks like the Flying Spaghetti Monster soon attacks a train, containing Graham, Grace and a third random guy. By sheer coincidence (or for dramatic purposes, because the TARDIS doesn't normally do coincidences), it is also into that train that the newly-regenerated Thirteenth Doctor, who has been falling from the sky for a little bit, makes rather a rough landing... right on to of the Monster of the Week — nice shot TARDIS. Gotta love the first fifteen hours of a regeneration. Only barely noticing she changed her gender in the past half an hour — and liking it when it's pointed out — she assumes command even over the protest of policewoman Yaz, who has just arrived with Ryan in response to a cut-off call Ryan got from his Nan about the stalled train. The Doctor zaps the thing with a loose electrical cable, but since the sonic fell out of her pocket mid-fall, she's unable to stop the spaghetti monster from zapping all six of them and flying off. They return to the woods only to find the pod also gone.

The Doctor, after a brief collapse and rest, discovers they've all been implanted with DNA bombs which could kill them all remotely, then commandeers Ryan's phone to create a tracking device to locate the signal the bombs are connected to. The freezing Kiss is actually the travel pod of a tooth-stealing warlord-to-be named Tzim-Sha who has come to Earth to Hunt the Most Dangerous Game and thereby earn the leadership of his people, the Stenza. Only, he has no intentions of leaving anything up to chance, cheating by bringing the sparking, electric Spaghetti Monster (actually a part-creature part-machine called a "Gathering Coil") to help him find his target. The pod disappeared from the woods because Rahul, the brother of a previous target of such a hunt, recognized similar atmospheric anomalies happening, realized the creatures who took his sister Asha were coming back, and brought the pod to the warehouse that serves as the base for his search for Asha. He died trying to find out from Tzim-Sha where Asha was taken, but not before leaving a message that fills in the Doctor and company on much of what's happening.

Once again missing her sonic, the Doctor uses bits from the travel pod and odds and ends from the warehouse (and Sheffield steel) to construct a new sonic screwdriver. They use a tip from a fellow bus-driver mate of Graham to locate the Gathering Coil, learning from it the identity of the hunter's target, then encounter Tzim-Sha ("Tim Shaw") himself and learn of his cheating, not only with the Gathering Coil from which he uploads information on his target, but also a short-range teleport device. The target of his hunt is Karl, the other passenger on the stopped train. Thanks to Yaz's taking down his info as a witness, they track him to his workplace, a construction site where he operates a very tall crane. Unfortunately, Tim Shaw arrives before them, climbing the crane's tower while using the Gathering Coil to block pursuit by the same route.

The Doctor, Yaz, and Ryan climb a second crane (especially dangerous for dyspraxic Ryan) and swing its arm out to almost meet the crane Karl is on. Graham and Grace work on the ground to stop the Gathering Coil from bringing down the cranes, while the Doctor makes a leap across the gap and rescues Karl. Turns out she'd removed the DNA bombs from herself and her friends, and piggybacked them into the upload Tim Shaw had made from the Gathering Coil. When Tim Shaw sets them off, they all five go off inside him. The Doctor offers him an out with a key piece of the teleport recall, but Karl is not so forgiving and kicks him off of the crane. He teleports mid-air, dying from the DNA bombs. Unfortunately, Grace is knocked off the crane while disabling the Coil and falls, à la the Fourth Doctor. After a few words to Graham, she perishes.

The new friends all attend Grace's funeral, where Ryan's dad, her son, is conspicuously absent. Afterwards the Doctor heads to a charity shop to replace the Twelfth Doctor's damaged clothes at the insistence of Yaz, and chooses a rainbow shirt with a longcoat and some braces. They all go back to the warehouse, where with her new friends' help she uses the rest of the travel pod and even more eclectic junk to adapt the Stenza teleporting device, hoping to get to her TARDIS...

Only for viewers to be treated to a thrilling cliffhanger as the teleporter lands not only her but also her new companions in the void of space, with no blue box in sight... sans spacesuits. Cue the Oh, Crap!, then cue the new theme.note Unless you watched on BBC America, in which case you got a DW promo while the credits (if shown at all) were relegated to a tiny corner of the screen.