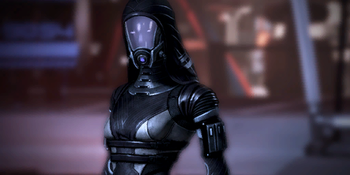 An Enclosed Extraterrestrial is a kind of alien whose entire race seems to cover their bodies from head to toe, whether by clothing, attire, armors or even especially designed artifacts. Sometimes this is done because they have some biological need, others just don't want any stranger to see their real looks because of some sort of cultural taboo, or because they are Energy Beings or Starfish Aliens choosing A Form You Are Comfortable With.

Often done for budgetary reasons (as it saves you time and money from complex make-ups and/or body painting), when correctly used may create some truly creative design and give the creatures a truly alien look. Sometimes combined with Uniformity Exception in order to save money on expensive makeup. Contrast with the exact opposite Exposed Extraterrestrials.

May overlap with Mobile Fishbowl, which is when aquatic beings survive on land by wearing or carrying water with them. Super-Trope to Little Green Man in a Can.