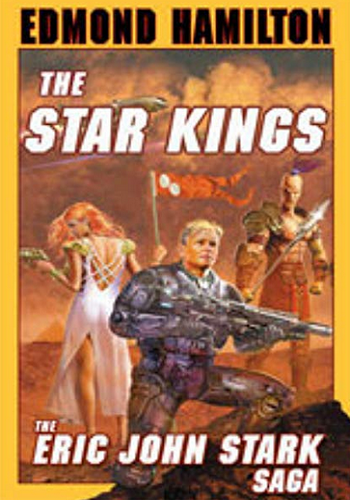 The Star Kings is a Space Opera novel by Edmond Hamilton, published in Amazing Stories magazine in 1947 and then in book form in 1949.
Advertisement:

It tells of the adventures of John Gordon, a 20th-century man who is transported 200,000 years into the future and finds himself inhabiting the body of Prince Zarth Arn of the Mid-Galactic Empire just as war and intrigue breaks out.

Hamilton returned to the setting in the 1960s, writing a series of short stories about John Gordon's further adventures that were collected in the book Return to the Stars. He and Leigh Brackett also collaborated on a one-off Crossover with Brackett's Eric John Stark series, "Stark and the Star Kings".

Alternative Title(s): Return To The Stars