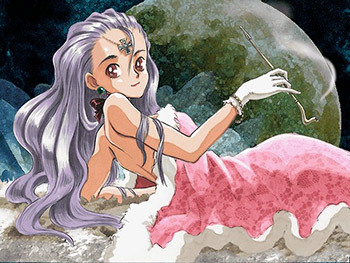 Just being a proper courtesan.
Saffron: I've made the bed warm for you.
Mal: It, uh, looks warm.
Saffron: And I've...made myself ready for you.
Mal: Let's ride right past the part where you explain exactly what that means.
— Firefly, "Our Mrs. Reynolds"
Advertisement:

Ready for Lovemaking is when a character presents themself in a way that shows this character is totally ready to have sex. Usually applies to ladies, but can be guys as well, and for any sexual orientation. Often, the character is lying on a bed and/or wearing something skimpy or nothing at all, but there are plenty of other ways that characters can present themselves. Sometimes it's in anticipation of sex, and sometimes it's outright seduction.

If it's anticipation, the likelihood of this character actually getting some is inversely proportional to the amount of time we see this character getting ready.

If it's seduction, we rarely see any preparation. We just see the target walk into a room, and the seducer is right in there. The success rate is inversely proportional to the targets' moral fiber, or willpower (if the seducer has some other methods to enhance the seduction).

Used a lot in Sit Coms, usually played for comedy with an unsuspecting man coming home to find a sexy woman waiting for him. Having prior knowledge of the woman is optional. Having his wife or lover catching him with the seductress… less so.

Naked in Mink can be a form of this.

A Super-Trope to Sexy Coat Flashing.

Compare Slip into Something More Comfortable, Bathe Her and Bring Her to Me, Go-Go Enslavement, Coy, Girlish Flirt Pose (a less direct Sister Trope).

Contrast Really Gets Around, Ignore the Fanservice.