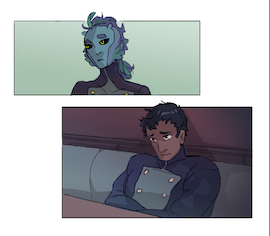 Set in the undefinably-semi-distant future at Astris Academy, the ultimate off-shoring school for the children of the wealthy, Starling is the story of Roy Calabi, the teenage clone of a man instrumental in Earth's violent victory over the planet Empyrean in an interstellar war some forty years ago. In the name of cultural exchange, Astris has just enrolled its first Empyrean student, a stellaraptor named Elliott Blue, and he's in Roy's class.

Needless to say, it's very awkward.

If the story reminds you eerily of an anti-colonial, queer Ender's Game, you'd be on the right track. The working title of Starling was Ender's Gay.