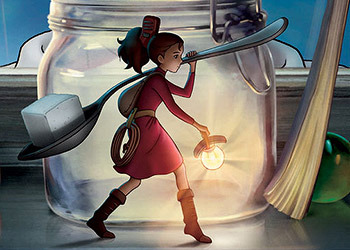 "I perceived it to be a human creature not six inches high, with a bow and arrow in his hand, and a quiver at his back."
— Lemuel Gulliver, Gulliver's Travels
Advertisement:

Little People— really little people. Lilliputians are humanoid characters whose main characteristic is that they are very, very small. Like, up to your knee small. Size of your thumb small. Size of an ant small.

This may be the result of a shrink ray experiment gone wrong, but it's most likely the natural size of these beings, in which case they probably live in a Mouse World. Whatever the case, you can be assured that life for these guys is going to be tough, as every insect is a threat, every step up a staircase is a colossal climb, and no big person ever watches where they're stepping.

Lilliputian Warriors is a subtrope, for when these guys kick ass despite fitting in the palm of a hand. Certain members of The Fair Folk and House Fey may double as Liliputians, but those have their own pages. Regular-sized people who shrink down and then revert to normal size fall under Incredible Shrinking Man; this is for naturally small humanoids. Contrast Our Giants Are Bigger, to whom we are the Lilliputians.

Not to be confused with Liverpudlians.