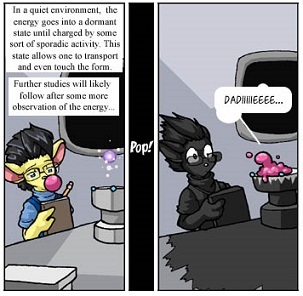 Casual Fridays never really work well in these places.
Olaf: Hi! I'm Olaf and I like warm hugs!
Queen Elsa: Olaf?
Olaf: You built me! Remember that?
Queen Elsa: And you're alive?
Olaf: Yeah, um, I think so ...
— Frozen
Advertisement:

The Professor has some really cool experiment going on. Probably involving biology, computers, or something like that. The result is indeed cool. In fact, it's so cool that it has the unforeseen side-effect of being an actual person. Whoops!

This new person or species is benevolent, and quite obviously worthy of human rights. Obvious to the audience, that is. The creators might fail to understand this, thus causing all kinds of trouble. However, in some cases, rejection from the creators may lead the created character to resentment or worse. They may also end up with Pinocchio Syndrome or wanting to Become a Real Boy.

If this trope leads to Deity of Human Origin, expect it to come with a dose of God Is Flawed. Contrast Creating Life Is Bad and Creating Life Is Awesome, in which creating sentient life is the goal.

Supertrope of Instant A.I.: Just Add Water! and It Came from the Fridge: If the unforeseen intelligence is technological or culinary in nature, see that trope instead. Examples of ambiguous nature go on both pages.