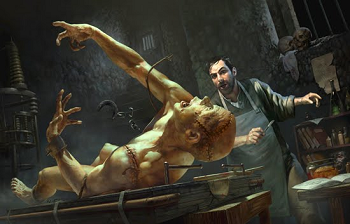 "IT'S ALIVE! NOW I KNOW WHAT IT FEELS LIKE TO BE GOD!
"He created an angel just for himself, he gave her beauty he gave her life, but she couldn't live without a soul..."
— Blutengel, "The Oxidizing Angel

In many lores and settings, humans creating life (especially intelligent life) is not awesome, and the act of creation does most certainly not make them valid Gods. On the contrary, the act is considered to be a foul act of hubris, often referred to as Playing God. Even if the character doesn't claim to be (like) one.

The creation of autonomous, independent, and above all intelligent life has long been the exclusive province of the divine. Just about every creation myth has the creation of animal and then sapient life forms as the second or third thing done; right after space/time but before waffles. Even assuming there is no God, the odds of it happening are such that it is a secular miracle not to be taken lightly. Thus this trope.

Often however you'll see the Luddite throw accusations of "Hubris" and "Playing God" for something as minor as inventing a new species of bacteria to break down inorganic trash heaps, which realistically would be just another GMO. Besides, by these standards, humans have already been "playing God" since the domestication and selective breeding of the wolf into the dog first started over fourteen thousand years ago.

This archetypal plot probably emerged due to how artificial lifeforms might invoke an effect similar to the Uncanny Valley.