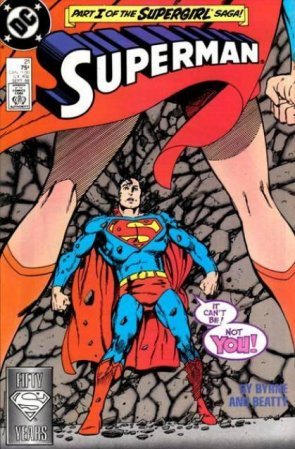 Not the same one as before, but it is her!
The Supergirl Saga is a three-part Story Arc that took place in the Superman comic book titles in 1988, published by DC Comics. It was John Byrne's final arc on Superman, with artwork by Byrne and Jerry Ordway. It was written as an introduction to the first Post-Crisis version of Supergirl known as "Matrix", with previews of the character appearing as early as Superman vol. 2 #16 (April, 1988).
Advertisement:

In the story, Superman encounters a young woman wearing a variation of his outfit that calls herself Supergirl, claiming that her powers came from Lex Luthor. A brief fight occurs due to a misunderstanding between the two, but after Superman and Supergirl straighten things out, it is revealed that she came from the Pocket Universe that Superboy of the Legion of Super-Heroes had come from. With the both of them now transported into that universe, Superman learns from its Lex Luthor the history of its Earth since Superboy had departed: that Lex had accidentally let loose the Phantom Zone criminals that have terrorized and devastated the entire planet, leaving only those who are within Lex's Smallville citadel its only survivors. The Phantom Zone criminals eventually killed the last surviving people of that Earth and reduced Supergirl to a protoplasmic puddle, where it is revealed that she was actually an artificial lifeform created by Lex Luthor to replace the deceased Lana Lang. Realizing that he was the only superhero left in the Pocket Universe, Superman rounded up the Phantom Zone criminals, stripped them of their powers, and subjected them to lethal radiation from that world's Green Kryptonite. At the end, Supergirl was brought back in her protoplasmic form to the mainstream DC Universe by Superman to be cared for by the Kents.

The story was published in Superman #21-22 and Adventures of Superman #444.