Ain't Too Proud to Beg 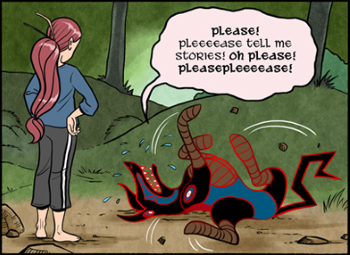 The Coyote. Breaker of minds. Shaper of worlds. Lacker of dignity.
I know you wanna leave me
But I refuse to let you go
If I have to beg and plead for your sympathy
I don't mind, 'cause you mean that much to me
Ain't too proud to beg, sweet darling
Please don't leave me, don't you go.
— The Temptations, "Ain't Too Proud To Beg"
Advertisement:

The opposite of Defiant to the End, this is when the hero of his own accord begs for mercy, or bows, kneels, cowers, or does pretty much anything covered under Kneel Before Zod. Usually, this may happen if the hero's Subterfuge Judo has failed. Technically, this trope isn't morality-sensitive, but heroes tend to be a lot less interested in submission, so it usually is done for the benefit of a villain.

Compare Villains Want Mercy, the inverted trope where villains, having ended up defeated and cornered by a hero, will try to beg or bribe the hero into letting them go or, if they are faced by a particularly angry Anti-Hero, for their life to be spared. Such situations pretty ubiquitously is meant to show that the villain, despite any bravado they might usually project, is a two-faced Dirty Coward when the chips are down. Compare to Too Desperate to Be Picky, which may overlap if the begger is acting against their own standards out of desperation.

Maybe they know for a fact that rescue is coming, or maybe they just figure that every moment they're not dead is another chance for a miracle to happen. Either way, they're sacrificing some dignity now for some kind of gain later. (If the gain is immediate, to lead their opponent to believe the fight is over, this is I Surrender, Suckers instead.) This will usually involve Holding the Floor.
Examples
Anime and Manga

Usually very much the darker variety. Their resistance has been successfully broken, whether through Breaking Speeches or Cold-Blooded Torture or some other means, and their submission is a sign of that. They'll probably recover, unless we're going for a massive Downer Ending, but for now, the villain has what he wants. Tears of Fear and Please, I Will Do Anything! can be involved.

Alternatively, a Pragmatic Hero may beg for mercy or aid to avoid an unnecessary fight, even if it hurts their pride. A more positive use, and more likely to actually work.

The moment Starro manages to capture and hold The Thinker, who had been experimenting and torturing Starro for at least 30 years, The Thinker feebly and pathetically begs for mercy. It doesn't work.

The moment Starro manages to capture and hold The Thinker, who had been experimenting and torturing Starro for at least 30 years, The Thinker feebly and pathetically begs for mercy. It doesn't work.