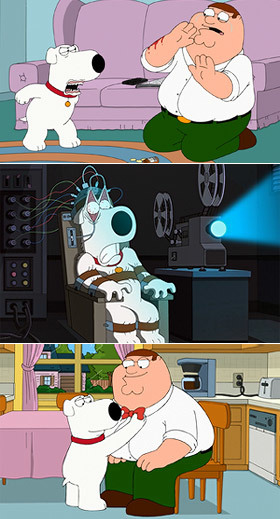 Taken from A Clockwork Orange, this was the name of the morally dubious "aversion therapy" undergone by the Villain Protagonist to "cure" his sadism. This procedure involved him being drugged and strapped to a chair with his eyes held open and made to watch hours of violent scenes (at one point, while his favorite music, Ludwig van Beethoven's Ninth Symphony, played in the background). Although in the original novel and film, the end result was that Alex felt extreme nausea whenever he thought about committing violent acts (or whenever he heard Beethoven's Ninth), the scene has been subject to much Popcultural Osmosis, often ironically as a form of Mind Rape to foster psychopathic behavior in the subject, rather than quell it.

Unfortunately, as this is basically Classical Conditioning (or Operant Conditioning), this is very much Truth in Television.

See also Restraining Bolt. May overlap with Sleep Deprivation Punishment, as the subject is often forced to stay awake for the conditioning. Compare 2 + Torture = 5. Not to be confused with Forced to Watch.

Frylock straps Shake and Meatwad to make them watch all the world's knowledge on one big DVD.

Frylock straps Shake and Meatwad to make them watch all the world's knowledge on one big DVD.