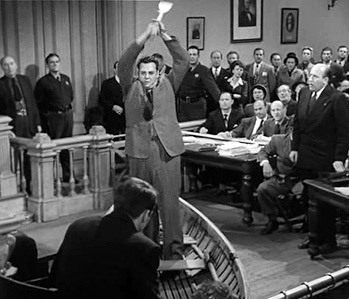 Would you believe that isn't Perry Mason?
Mia Fey: What's wrong, Phoenix?
Phoenix Wright: Usually... Well, usually, the real killer confesses his or her guilt. And now that I think about it, this is the first time someone hasn't.
— Phoenix Wright: Ace Attorney – Justice For All, case 4
Advertisement:

When the only possible way for a lawyer to save his client is to badger a confession out of a witness on the stand in the courtroom. Sub-Trope of Perp Sweating. Frequently stems from Accusing the Witness. The result is usually a Motive Rant. The first step is often to Pull the Thread.

This is a popular way to avert the Fridge Logic inherent in Conviction by Contradiction; in this case, catching the witness in a lie doesn't prove they're the culprit; it just convinces them the jig is up so they'll convict themselves by confessing. When played straight, this one is also a subtrope of Hollywood Law—defense attorneys often discredit witnesses through various means and posit other potential suspects (named or unnamed), but forcing a confession is difficult to do without being disbarred. In the United States and the United Kingdom, forcing the defense to prove that someone else is guilty is Shifting the Burden of Proof (in a criminal case), but this is rarely mentioned in media, as it removes the "solve the mystery" element.

Averting this trope is one reason why in Real Life defence attorneys usually try and avoid calling their client to the stand unless there's absolutely, positively no other choice—the last thing they want is their client getting flustered and goaded into coming out with something potentially incriminating before a jury.

Named for the iconic 1957-1966 Law Procedural TV series Perry Mason, in which Perry's client was always innocent, and Perry always won the day by getting the guilty party to confess on the stand during cross-examination. A sub-trope of Courtroom Antic. Similar to The CSI Effect, where juries demand forensic evidence no matter how hard to find or malleable it may be.