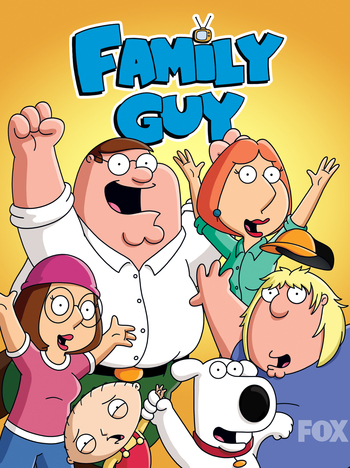 Freakin' Sweet! note  clockwise from top left: Peter, Lois, Chris, Brian, Stewie, Meg.
"It seems today, that all you see
Is violence in movies and sex on TV
But where are those good old-fashioned values
On which we used to rely?
Lucky there's a Family Guy!
Lucky there's a man who positively can do
All the things that make us
Laugh and cry!
He's... a... Faaam-ily... Guuuuuuy!"
— Theme Tune
Advertisement:

Premiering in 1999 on Fox, the show made history for American network television for being uncanceled — twice. Fox announced the show's cancellation after its second season in 2000 when it was beaten in ratings by shows like Frasier on NBC and especially ABC's Who Wants to Be a Millionaire?, but the show was given a last-minute reprieve and Fox ordered another 13 episodes. However, its ratings suffered as its time slot changed constantly and it competed against the ratings-behemoths of Survivor on CBS and Friends on NBC. After the third season in 2002, Fox cancelled the show "for good," but in 2005, the show was resurrected yet again due to popular demand, impressive ratings for its reruns on [adult swim], and unusually successful DVD-set sales.

Family Guy has since become one of the network's most successful franchises, promoted by its suits with the same fervor given to The Simpsons as well as American Idol and 24 in their heydays. This made Seth MacFarlane the highest-paid Hollywood writer for a few years after its second revamp, and allowed him to produce the Spin-Off series American Dad! (which was actually made to replace Family Guy) and The Cleveland Show, both under the same studio, along with the Star Wars spoof Family Guy Presents: Laugh It Up, Fuzzball.

Further media ventures in the wake of the show's pop culture phenomenon status include:

But where are those good, old-fashioned tropes...on which we used to rely?:

Atop of the Sarlacc Pit, Luke instigates the signal for the escape plan, which is passed around by everyone numerous times until they begin.

Atop of the Sarlacc Pit, Luke instigates the signal for the escape plan, which is passed around by everyone numerous times until they begin.