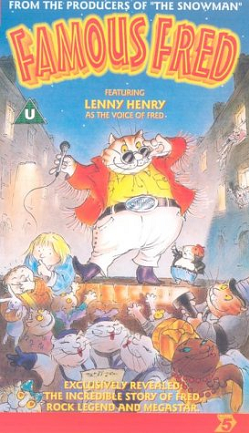 Famous Fred is a 1996 30-minute Animated Musical based on the picture book Fred by Posy Simmonds. It was made by the same people who created The Snowman.

The night after Fred the cat is buried at the bottom of the garden after dying from cat flu, the children of the family sneak outside and stumble across the cat community having a funeral for him. For Fred was no ordinary cat; he was pretty much the cat version of Elvis. Kenneth, the family's guinea pig and Fred's manager, tells the story of Fred's rise and fall. After leaving the opera house, Kenneth moved into the house and taught Fred stardom, but after they both embark on the 'Famous Fred World Tour' Fred falls into bad habits, and eventually catches the illness that's the death of him. Then everyone goes inside to party to a bootleg of his final song, and scarper, leaving Kenneth to tidy up. But has Fred really used up all nine of his allotted lives?

The story is interspersed with Fred's songs, sung by Lenny Henry who also voiced Fred. For tropers in the UK, the film can be seen here.

A Vimeo version is here.