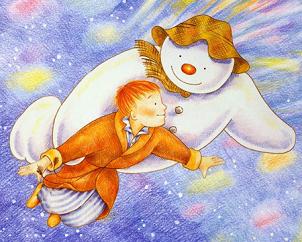 On your marks... get set... CRY!
"I remember that winter because it had brought the heaviest snows I had ever seen. Snow had fallen steadily all night long and in the morning I woke in a room filled with light and silence, the whole world seemed to be held in a dream-like stillness. It was a magical day... and it was on that day I made The Snowman."
— Raymond Briggs, author
Advertisement:

In 1978, English illustrator and artist Raymond Briggs drew a wordless Graphic Novel about a Snowman who comes to life at Christmas titled simply The Snowman. In 1982, it was adapted to a 26-minute animated film for the then-fledgling Channel 4, and became an instant Christmas classic and the favourite Christmas Special for many Britons. It is now shown on Channel 4 every Christmas.note Exactly when varies year-by-year, but Christmas Eve or Christmas Day are by far the most common, and recent years seem to have settled on the former. 1984 is the only year in the channel's existence when it wasn't shown.

The plot is simple: a young boy (officially named James) awakens on Christmas Eve (or possibly New Year's Eve, the dialog free nature makes it hard to tell) to find a thick blanket of snow on the ground around his countryside home. He decides to build a Snowman which comes to life that night when he wakes up in the night (his parents remain slumbering).

After several escapades, including a memorable motorcycle/car ride around the local fields the Snowman reveals another special ability when he flies the boy to a snow-covered northern forest, with the song "Walking in the Air" playing in the background. There, Father Christmas and a large group of other living Snowmen and Snow-women are having a party. Father Christmas gives the boy the gift of a blue scarf with snowmen on it. Then the Snowman flies the boy home. They part ways when the boy goes back to bed and the Snowman remains standing in the garden.

Come the morning, the boy rushes downstairs to bright sunlight, and hurries to greet his new friend in the garden. However, when he gets to the garden, all that remains is a pile of melted snow and a collection of coal and old clothes. The boy wonders if he dreamt it all but then finds the scarf from Father Christmas in his dressing gown pocket, and breaks down in tears... As does the audience.

Most famous for the song "Walking in the Air", which many a choir (and even Heavy Mithril band Nightwish) has sung at some point.

In 1991, a companion film based on Father Christmas was made based on Briggs' other Christmas piece, in which both James and the Snowman make a cameo.

30 years later, a sequel, The Snowman and the Snowdog, aired 24th December 2012 on Channel 4. It follows Billy, who has moved with his mother into the house that James used to live in. At Christmas, he writes to Father Christmas, saying the only thing he wants that year is a new dog to replace his old one that had recently died. In the process, he winds up finding a picture of James and the snowman, and decides to build both him and a snow-dog, who both come to life the next morning.

Not to be confused with the unrelated 2017 film, or living snowmen in general.

Tropes found in the animated short:

Tropes found in The Snowman and the Snowdog: