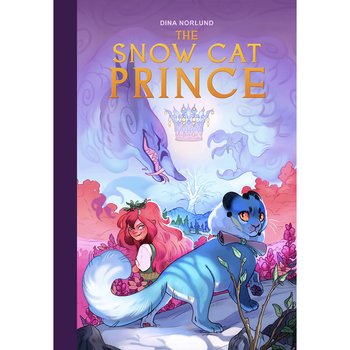 The Snow Cat Prince is a Fantasy Comic Book by Dina Norlund.

There is a kingdom ruled by a king with seven sons, all of whom are cats. Of these, the youngest is Syv. Syv is different from his brothers. He isn't selfish or greedy, and he enjoys walks outside the castle walls among the citizens.

When the king dies, Syv finds himself tasked with a quest. He must go beyond the three horizons to find the Magical crown that was stolen by evil foxes who have placed a curse on their land. Syv's quest will not be easy, as he will face strange villages, dark powers, and mad beasts. Worst of all, if he is unsuccessful in his quest, he will be marked with three black stripes and be banned from his home forever.

The book was funded on Kickstarter on September 2nd, 2019 and ultimately released on February 20th, 2020. It is only available on HushBird