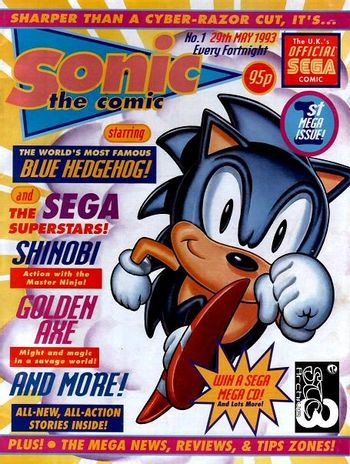 The World's most famous Blue Hedgehog! ...then again, he is the world's only Blue Hedgehog.
Sharper than a Cyber-Razor Cut, it's Sonic the Comic!
—The tagline for the very first issue.
Advertisement:

A British comic by Fleetway which originally ran in the nineties, but has since seen an online revival. Although Sonic the Hedgehog is in the title, it began as a sort of Sega equivalent to Nintendo Power (although not to be confused with the Official Sega Magazine which ran at the same time), showcasing strips about upcoming Sega games along with reviews, cheat codes, walkthroughs, and the like. As time went on, various factors (including a hedgehog version of Wolverine Publicity) caused most of those to be phased-out in favor of more Sonic stories.

Along with Sonic, other games to spawn their own strips included:

The UK's Sonic adaptation was distinct from all others, chiefly because it strove to accurately translate the world of the games into serial form. This included the Zones, rings, Star Posts, Badniks, animal friends and more. Those elements sometimes appear in other adaptations, such as the Archie Sonic series (which had a murky sense of how Rings and Zones actually worked or where they existed in relation to the 'verse), but not to the same degree. A few inconsistencies can be blamed on Sega's typically-poor communication with their media outlets in the west: for instance, Nack the Weasel (a.k.a. Fang the Sniper) was introduced in Sonic the Comic as a member of the Chaotix, despite him debuting in Sonic Triple Trouble and having nothing to do with that team. (Admittedly, Knuckles does feature in both games.)

The book really took off following a Time Skip in which Sonic was hurled into a Bad Future. The next ninety-odd issues consisted of Sonic organizing the Freedom Fighters and toppling Robotnik in the 100th issue.

Like Archie, the book had its own stable of Canon Foreigners: Captain Plunder the Sky Pirate, Grimer (The Igor to Robotnik's Frankenstein), Doctor Zachary, Metallix, Shortfuse the Cybernik, and Tekno the Canary. Metallix was an effort to add more distinctiveness to the video game villain Metal Sonic: Metallix was the "Emperor" of a legion of Metal Sonics who broke free of their creator. This led to a deliberate Shout-Out when those robots went around shouting "Exterminate!" The comic also has its own take on Super Sonic, which asks a simple yet horrifying question- what would happen if Super Sonic was a murderous psycho?

Fleetway did acknowledge their Archie counterpart and its inspiration Sonic the Hedgehog (SatAM) in magazine features, but they did not incorporate any of that into the UK Sonic's canon. (Alhough Sonic the Comic may have influenced Archie near the end: Both books featured Knuckles fighting an albino member of his species, and an Enemy Without plot involving Super Sonic going on a rampage.) Similarly, the book was not linked to the earlier UK Sonic novels that had, for example, SatAM's Sally Acorn as a character; however, the novels did appear to influence the comic. Both had time-travel plots that involved Sonic being forced to instigate the accident which created Robotnik, as the alternative was even worse; being conquered by Metallix in the comics, and the whole universe being infected by Chaos in the novels.

After the print magazine's demise, the comic (as well as some of the articles) was continued by fans under the name Sonic the Comic Online.

The Trope Page for the online continuation of Sonic the Comic can be found here. For a time, the original comic had its own site with issues uploaded weekly, but it no longer exists.

There is a series of retrospectives

covering Sonic the Comic that are posted on YouTube, as well as reviews of current STCO issues. The first of these retrospectives can be found here.

There is also an issue-by-issue retrospective podcast which can be found here.

StC also has its own Wiki which is found here.

It has absolutely nothing to do with SoniComi.

Sonic the Comic contains examples of: