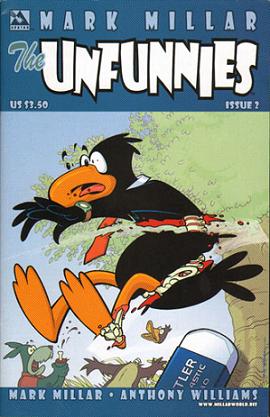 The least disturbing thing about this series.
"As Williams began getting scripts and read what he had to draw, we wondered whether there was ever a moment where the artist had to stop and catch his breath before continuing. He answered in the affirmative. "Every page, and it's getting worse. Somebody help him before it's too late." And when Williams began sending back finished pages to Millar, the writer did have a few recommendations and changes for the artist. "Bizarrely, I was drawing too well. I'd get repeated emails saying 'Make it shittier.'"
— Comic Book Resources
Advertisement:

The Unfunnies is a four-issue Black Comedy horror comic book written by Mark Millar with art by Anthony Williams. Quite frankly, it lives up to its name.

A world resembling classic Nelvana/Hanna-Barbera cartoons is becoming increasingly messed up as characters discover sex, swearing and murder. Little do they know that it's the work of the creator of their world, Troy Hicks, a child molester/killer who used occult magic to switch places with one of his cartoon characters in order to escape from death row.