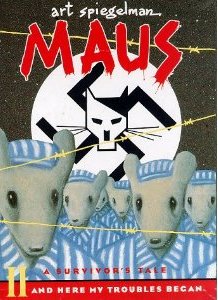 Aww! Cute animals! Junior'll love this!
"This is a bootleg copy of Itchy & Scratchy meets Fritz the Cat. Because of its frank depiction of sex and narcotic use, it is not fit for an infantile intellect such as yours."
— Comic Book Guy (to Bart and Lisa), The Simpsons
Advertisement:

A Mature Animal Story is a work designed for and marketed toward adults and older teens featuring anthropomorphized animals as its main cast, and which contains content that is generally considered inappropriate for little kids.

To many, cartoons, comics and other stories featuring animals as major characters are treated as light, whimsical entertainment suitable for small children. While adults may enjoy such works, they are primarily marketed toward young kids, and are careful to avoid material that is either too explicit or too serious and sophisticated for children to understand. While such works still might contain some conflict, or even a Disney Death, it is always at a level considered "Family Friendly" and "Safe for Kids".

Also, until recent advances in CGI, fictional animal characters, especially anthropomorphized ones, in visual mediums were mostly confined to rather silly looking costumes, cartoons and comics. These features were generally associated with less serious children's stories, and therefore weren't going to be all that big on more "mature" topics like violence. Talking Animals in particular are often considered kids' stuff.

A Mature Animal Story, if it is made after the Victorian era, breaks away from this Newer Than They Think "animal stories are just for kids" perception. The primary audience is adults and/or older teens. Stories still might be comedic, but they will also often have a serious and dark side to them. Many such works are almost entirely drama instead of comedy. They often contain graphic violence, sexuality, and profanity.

Works of the Furry Fandom tend to be this mature kind, and mature animal stories are Popular with Furries, because furries are usually teenagers and adults who take anthropomorphic animals seriously as if they're humans, not fluffy children's characters.

These stories typically involve animal characters ranging from Largely Normal Animal to Beast Man on the Sliding Scale of Anthropomorphism, but can include non-anthropomorphic animals. They frequently, but not always, take place in a World of Funny Animals.

This is a Sub-Trope to Animation Age Ghetto and What Do You Mean, It's Not for Kids?. Compare Xenofiction. Also compare Mature Work, Child Protagonists for other mature-aimed works that feature characters generally considered limited to children's fiction.

Please note that if it is marketed as a work for children, it is not this trope, no matter how "mature" its themes may be.