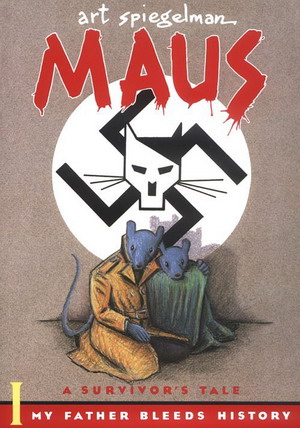 Beast Fable indeed...
"If you lock them together in a room with no food for a week...then you could see what it is, friends!"
—Vladek Spiegelman
Advertisement:

Maus is the signature work of Art Spiegelman, a pioneer of the underground comics movement of the 1960s and 1970s. The work is a memoir of Spiegelman's parents, Holocaust survivors, and is interspersed throughout with images of Spiegelman and the strained relationship he has with his father in the present day. The interviews Spiegelman conducted with his father during this time make up the bulk of the book.

The work has all the basic underpinnings of a Holocaust memoir, portrayed in the comic book style. If you had seen it before, you would have recognized it: As a Mature Animal Story, World War II-era nationalities and people are all portrayed as Funny Animals.

Maus is in two parts, both released to heavy critical acclaim: "Part I (My Father Bleeds History)" in 1986 and "Part II (And Here My Troubles Began)" in 1991. In 1992, it received a special Pulitzer prize.

A CD-ROM version was released for Windows and Macintosh computers as The Complete Maus in 1994, containing both parts in a movie format. A book about the creation of Maus titled MetaMaus was released in 2011, including images of Vladek and interviews with Spiegelman and his family, along with a DVD-ROM with video and the Complete Maus.

This work provides examples of (many of them Truth in Television as it is Based on a True Story):