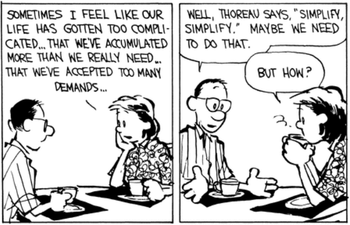 They fuck you up, your mum and dad.
They may not mean to, but they do.
They fill you with the faults they had
And add some extra, just for you.
But they were fucked up in their turn
By fools in old-style hats and coats,
Who half the time were soppy-stern
And half at one another’s throats.
— Philip Larkin, "This Be The Verse"
Advertisement:

Unlike the all-powerful but undercharacterised Parent ex Machina, the reader/viewer knows about The Protagonist's parents. They have friends outside the home, hobbies that take them out of the house and full time jobs. The audience will also be able to discern what kind of relationship the two have as a couple—whether they're still as starry-eyed over each other as they were when they started dating, or on the brink of divorce. They will have quirks, character strengths and character failings.

They'll also be hopeless as parents.

This couple are not usually nasty—or, if they are, we'll be told all about their Freudian Excuse. They're probably at least sympathetic, if not downright likable. We'd probably like to have them as friends, but definitely wouldn't want them as parents. One way to tell which you're dealing with is to see the actions the story takes to humanize the parent. If the parent is actively evil like a Wicked Stepmother or Evil Matriarch, then that is not this trope. If the parent is neglectful, demanding, or ignorant of the damage they are causing, but the story shows that they're doing this unknowingly or out of a lack of awareness while partaking in activities or backstory to explain this behavior, then you're dealing with this trope. Be aware that such a character can still be an Antagonist without being an outright Villain.

If you're a protagonist, and your parents are given lots of witty one liners, lots of characterisation and inhabit the Competence Zone to some degree, expect to suffer Parental Abandonment as they pursue their hobbies and relationships at your expense. If mom and dad are still together, you'll be a living example of the phrase "the children of lovers are orphans," as the parental units will be too wrapped up in each other to spend much time with you. On the other hand, if they're fighting constantly, they'll be too busy yelling at each other to notice that you haven't eaten in three days.

One particular type of this parent is one, usually-single parent that is firmly in the Competence Zone, and probably a part of their child's zany schemes. Their friends will think these parents are "cool" and they will probably agree… he just wishes his dad would occasionally show up to parents' night, and that mom remembered to cook dinner every so often.

The "golfing dad" is an old trope, and if dad's the only absent parent the child probably won't suffer too badly (until the plot calls for it). However, if mom has a hobby that takes her out of the house, works at a demanding job or has a problem that makes her borderline unfit as a parent, parental neglect will almost certainly be a plot point. How it's approached varies from show to show, from the mother realising she'd go mad without her career, to an enormous guilt trip about abandoning her child.

If this happens in a family of sufficiently high social standing, particularly in a medieval setting (being a king requires a lot of work, you know), there is a chance that the protagonist and/or one or more of his siblings may become Royally Screwed Up as a result.

Unlike Parent ex Machina, these parents aren't infallible, and they can't solve all of their kids' problems because they can barely handle their own. Their son or daughter can't blithely assume that "dad will take care of it," because he won't. Or he'll try to and fail spectacularly.

To compensate, there's usually an alternative mentor who fills in for the absent or ineffective parent. If not, the child will be an adult long before his time as being the Only Sane Man in a crazy family will force them to take care of themselves. If they're the oldest sibling, they'll probably be the "alternative parent."

Someone who believes in Honor Thy Parent may point out that parents still deserve respect despite their failings; how much the child agrees with that is up to them.

Bill does deeply care about his daughter, however his relationship with her is strained, due to his overprotectiveness of her and his work for the Lord Protector.

Bill does deeply care about his daughter, however his relationship with her is strained, due to his overprotectiveness of her and his work for the Lord Protector.