Webcomic / Whispers in the Wind 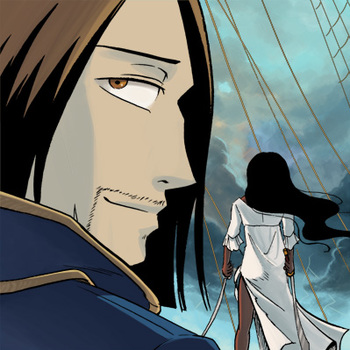 Bailey & Scarlet
"Will I be able to kill him this time?"
— Scarlet Maynard
Advertisement:

Whispers in the Wind

is an ongoing Webcomic mixing adventure and drama in a world of pirates.

It is a peaceful life with its ups and down Scarlet and her family lead in Omiryn. But everything changes when pirates attack the town and when Bailey the captain comes knocking at her door, she recognizes him and runs away from the man. As morning rises, she realises not only she has lost her husband in the attack but Evan her eldest left with Bailey whom she reveals to be the boy's father. Having nothing left to lose, she sets on a quest to get her son back and face the demons of her past. But she has one more thing to protect: her daughter Robin, who can't stand being left behind and manage to go with Scarlet.

The story follow two parts: the voyage of these two women where the dark past of Scarlet will unfold little by little and the adventures of the pirate crew where Bailey will do everything he can to make Evan see things his way. Because he knows that with Evan on his side, Scarlet will come to him...

Whispers in the Wind provides examples of: