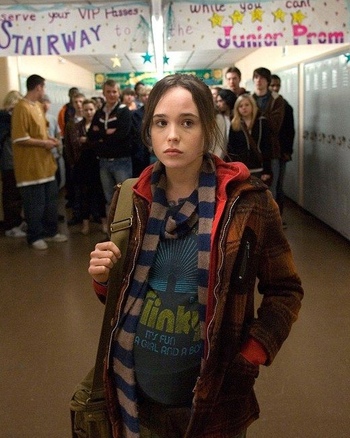 Growing up, with a bump or so along the way.
Jenna: I can't believe it, Alli. I'm pregnant...and I'm a teenager. I'm a...
Alli: ...pregnant teenager?
— Degrassi: The Next Generation
Advertisement:

A stock plot. An adolescent girl who hasn't finished her education, her maturation of body and mind, and isn't in a stable relationship gets pregnant. (The father may or may not stick around if he's similarly underage.) The actual age at which the pregnancy isn't an issue anymore varies according to these factors.

This trope is usually the result of adolescents fooling around without protection or not fully understanding the biology and mechanics at work, though in particularly dark works it may result from rape. Another possibility is that the girl gets pregnant from the very first time she has sex, driving home the message that even a single night of indiscretion can have far-reaching consequences.

The typical fictional teenager generally tries to hide the pregnancy from their parents for as long as possible, which never actually equates to when they start looking visibly pregnant. This may ultimately result in a Prom Baby. For situations in which the kid in question is hiding it from others besides the parents, see also Stigmatic Pregnancy Euphemism.

Since Status Quo Is God, the majority of earlier television series and other American media usually have the young mother suffer a Convenient Miscarriage or else put the baby up for adoption. If this is a soap opera, you can count on the child returning to find their real parents as soon as they reach adulthood, which usually takes about ten years. This can even affect shows that aren't so long-running as to portray the teenage mother growing up since an adult character can be revealed to have given up a child for adoption as a teenager as a plot point.

Another option to avoid scandal is for the girl's parents to raise their grandchild as their own, such that the baby grows up particularly close with their "big sister." This usually leads to no shortage of angst all around when the truth inevitably comes out. More recently, such underage mothers in Darker and Edgier shows may simply abort the baby, although this is still extremely rare. Even more recently, there's been a trend toward keeping and raising the baby with all the attendant comedy and drama this may bring, although this is hardly exclusive to the most recent works.

This is a very common reason for a character to be a Tragic Dropout.

Truth in Television, to the existence of no small number of children.