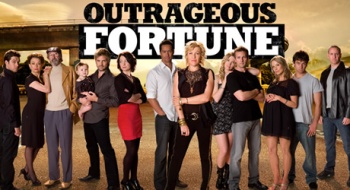 Outrageous Fortune is a New Zealand dramedy focusing on the Wests, a family of criminals who decide to go straight after the family patriarch, Wolf, goes to prison and subsequently disappears.

After Wolf leaves, Cheryl is determined to get the family to live honestly. Thrown into the mix are her twin sons, Van and Jethro, daughters Pascalle and Loretta and her father-in-law, Ted. Hilarity Ensues.

It had a short-lived US remake called Scoundrels on ABC in 2010 that was axed after 8 episodes.

A prequel titled West Side started the 30th of May 25. And, yes, Antonia Prebble plays Rita.

Not to be confused with the Bette Midler Shelley Long film Outrageous Fortune.