Series / Out of the Box 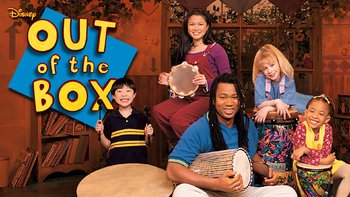 "We'll let imagination take us for a ride!"
"Here in The Box, it's really up to you!"
Advertisement:

Out of the Box is a Disney Channel television series that ran from October 1998 to June 2005. It was adapted from the works of Douglas Love.

The show takes place in a playhouse made entirely of cardboard boxes. Every day, a group of neighborhood children come and play in "The Box" with Tony and Vivian. The two hosts, Tony James and Vivian Bayubay McLaughlin, make crafts, sing songs, and act out plays with the children.

There are eighty-two Out of the Box episodes in total, with the series running for three seasons. For a long time after it was cancelled, the full series had never been fully released in either a digital or physical format. However, the full series was released on Disney+ on November 12, 2019.note save three Missing Episodes Playhouse Disney pulled from rotation

Out of the Box provides examples of:

So long, farewell, to you, my friends
Goodbye for now, until we meet again!

Example of:
Mistakes Are Not the End of the World