Mistakes Are Not the End of the World 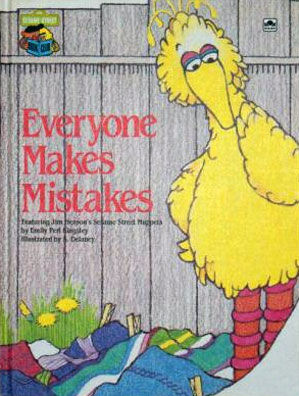 Oh, everyone makes mistakes
Oh, yes they do
Your sister and your brother and your dad and mother too
Big people, small people, matter of fact, all people
Everyone makes mistakes, so why can't you?
Linus: Well, I can understand how you feel. You worked hard, studying for the spelling bee, and I suppose you feel you let everyone down, and you made a fool out of yourself and everything. But did you notice something, Charlie Brown?
Charlie Brown: What's that?
Linus: The world didn't come to an end.
— A Boy Named Charlie Brown
Advertisement:

Mistakes. Sometimes they're bad as they seem, sometimes they're good happy accidents, and sometimes you can learn from them. But one thing is certain: most people, if not everyone, makes them, some more than others. After all, it is quite difficult to account for a number of issues sometimes, especially if distratced, and that landing on one's feet and doing one's best is what counts. However, not everybody is happy with or realizes this, as sometimes they need to learn a lesson and that's what this trope is.

Then, the character will have either or a combination of these feelings: embarrassed because they think everyone will laugh at or shun them for making the mistake or they'll lose their reputation as a good [whatever], or sad because they think they'll never be able to do the thing they're learning, weren't cut out to do something they were previously good at after all, or think that the consequence (e.g. making their team lose) was their fault. How they act on these feelings may vary: they might just cry or sulk, they might shy away, or they might try to give up the thing they made a mistake doing or go to ridiculous extremes to try to avoid making other mistakes.

They might also try to prevent anyone from knowing about their mistake, which will, at least in enough stories, inevitably fail. Common ways they'll try to prevent people from knowing are hiding the evidence (for example, trying to fix the Priceless Ming Vase or hide the stained dress) and blaming other people or the weather, which might fail because the lie is just too implausible and will usually lead to a second lesson: that lying is wrong.

Then, they'll learn that their mistake, and mistakes in general, are fine and normal. Maybe their role model reveals the fact that they make mistakes too, or made similar mistakes when they were first learning to do the thing the character is learning. Maybe all it takes is a Rousing Speech stating how everyone makes mistakes and (if it was a mistake at something they're still learning) that practice makes perfect. Maybe they learn it of their own accord, often because they have to try what they failed at again, sometimes even to save someone's life. Anyway, they're happy now. Sometimes this happens over the course of a whole plot, sometimes just a single scene or a subplot.

It must be noted that often the attitude is that mistakes are more forgivable if the mistake-maker has tried their best. The less effort they took to avoid making the mistake, the more likely they are to be at least partially blamed for it (which is why trying to invoke this trope on yourself to pull a Never My Fault is almost guaranteed to fail). However, if they did not realize that effort needed to be made or did not know how to make the effort (and it wasn't easy for them to learn how), they are more likely to be forgiven for not making effort, provided that they learn from the mistake as much as possible. As such, this trope is related to the Sliding Scale of Unavoidable vs. Unforgivable.

Often serves as An Aesop. One idiom that basically sums up this trope is "To err is human", sometimes with "To forgive is divine" attached to it. Hence, it's acting in the spirit of God to forgive. The "everyone/we all" or other statements regarding making mistakes are, indeed, one of the more common phrases in media, being a way to tell people that, at least generally, its okay to make mistakes - and with the possible addition that those who cast stones of harsh judgment may well be living in glass houses.

An obvious (and regular) subversion of this Trope is that someone tries to bring up this lesson, only for the failure to become Worse with Context and thus the lecture becomes that this mistake is "the end of the world".

Common in children's entertainment. A variation is seen in the Toilet Training Plot which lets the kid know that having accidents is okay. The mistake may become a Career-Building Blunder if someone's boss invokes the trope. The B Grade (where a straight-A student is sad/afraid/shocked because they got a B) often leads to this trope, but it's not quite a sub-trope because sometimes it only shows up as a brief gag. May stem from an It's All My Fault moment. If the mistake causes a lot of misery, the speaker (or the writer) will enforce that Misery Builds Character. This trope might be used to bring a character out of a 10-Minute Retirement. See also Necessary Fail, where something bad happening today leads to something good happening in the future.

Compare A Lesson in Defeat for when mistakes are necessary to learn humility. Contrast Can't Get Away with Nuthin', because sometimes with that trope, even if you do something accidentally it's unacceptable. Compare and contrast The Perfectionist, for whom this lesson could be met either with begrudging acceptance ("I know, but it doesn't make the mistake I made any less annoying") or outright hostility. If they lie to cover a mistake, the work may have an Honesty Aesop as well. See also Serious Business and Felony Misdemeanor where characters treat a mistake like The End of the World as We Know It.