When Life Gives You Lemons... 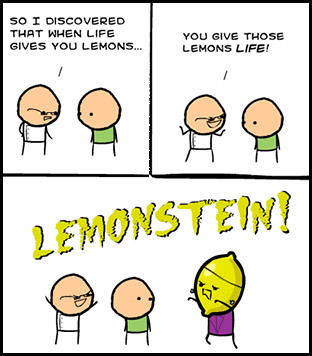 He makes a good lab assistant (or "lemon-aide", if you will).
"...don't make lemonade. Make life take the lemons back! GET MAD! I don't want your damn lemons! What am I supposed to do with these?! Demand to see life's manager! Make life rue the day it thought it could give Cave Johnson lemons! DO YOU KNOW WHO I AM?! I'm the man who's gonna BURN YOUR HOUSE DOWN! With the lemons! I'm gonna get my engineers to invent a combustible lemon that BURNS YOUR HOUSE DOWN!"
— Cave Johnson, Portal 2 (famously subverting this trope)
Advertisement:

A phrase said by some characters to show how optimistic they are. Even if something horrible has happened—being given the metaphorical lemons—one can still try to make the best of it. The original answer is to say "Make lemonade", but it can be altered for some casual humour. It can also be used to demonstrate that a character is cynical as they point out fallacies, and is very easy to turn into Metaphorgotten or [Popular Saying], But... to show a character is particularly unhinged.