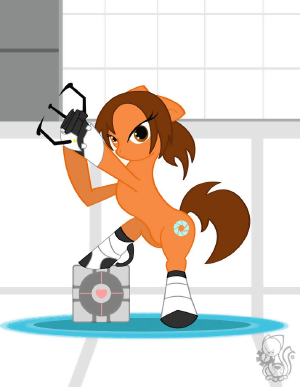 Better Living Through Science and Ponies is a crossover Fan Fic between My Little Pony: Friendship Is Magic and Portal.
Advertisement:

The story picks up where the single-player campaign of Portal 2 ends, with Chell on the surface wondering what comes next and GLaDOS prepping Atlas and P-Body for co-op testing. Unfortunately, a malfunctioning portal gun (which Wheatley had previously "repaired" with duct tape) creates an "uber-portal" that pulls the entire Enrichment Center, Chell included, into another dimension... namely, Equestria.

Chell, now transformed into a pony, manages to meet up and befriend some of the locals, and quickly settles into life in Ponyville. But her new home is threatened when GLaDOS turns her cyclopic eye on studying the ponies, and using them as test subjects...

was being developed, although unfortunately, the project is currently in a state of indefinite cryo-stasis and in need of new members. Anyone familiar with Source and is able to help should contact them. Their blog can be found here

It's now getting a fan-written sequel called A Trusted Friend in Science and Ponies.

This fic contains the following tropes: