Fanfic / A Trusted Friend in Science and Ponies 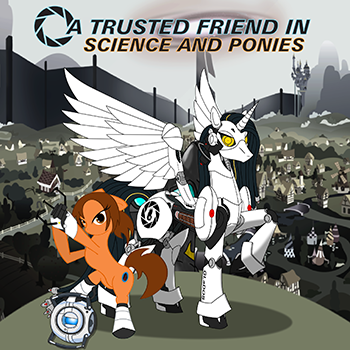 A Trusted Friend in Science and Ponies

is a Fan Sequel to Better Living Through Science and Ponies written by Rethkir. Like its predecessor, it is a crossover fic between My Little Pony: Friendship Is Magic and Portal.

It is an ongoing fic, first written two years after the publication of the original in response to its Sequel Hook and lack of a sequel. The story takes place following the events of the original, continuing the Story Arc. Picking up where the original left off, it is a longer and more in-depth tale that chronicles GLaDOS's plan to rebuild Aperture Science and the emotional turmoil it causes for Chell and her friends in Ponyville.

Spoilers for Better Living Through Science and Ponies will be unmarked.

After saving Equestria from GLaDOS's evil, Chell is finally able to live the life she never had... until GLaDOS sets in motion her plan to rebuild Aperture Science. It's only a matter of time before the experiments begin again, and only Chell will be able to stop her.

Tropes that appear in this story: