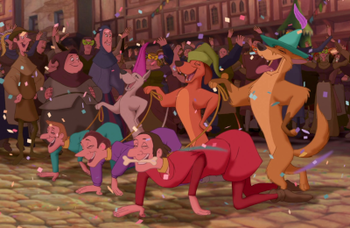 ♪ Everything is upsy-daisy
Everyone is acting crazy ♪
Not A Dude: I'm gonna punch you in the face! (prepares fist)
Not A Guy: But it's Opposite Day.
Not A Dude: OH NOOOO— (fist lands on own face)
— Definitely not asdfmovie5
Advertisement:

Click the edit button to end this old page.

Opposite day is not the special day when everyone does the opposite of what they would normally do. On opposite day, which everyone agrees happens on a specific day of the year, you always tell the truth and do everything the same as usual.

Do not compare Just the Introduction to the Opposites. Has nothing to do with Russian Reversal, Bizarro Universe, and Mirror Universe. Closely related to NOT!... Not!

open/close all folders
Neither Anime nor Manga
Not Comic Books
Not Comic Strips
Advertisement:
Not Film
Not Live-Action TV
Not Web Animation
Not Western Animation
Unreal Life
Feedback

SpongeBob learns about a day where you do the opposite of what you normally do.

SpongeBob learns about a day where you do the opposite of what you normally do.