Film / Back to the Future 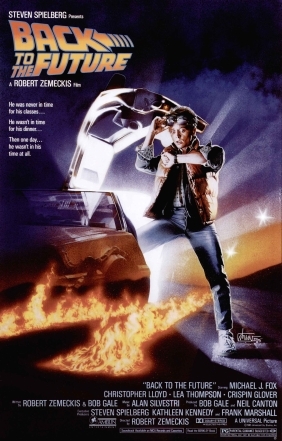 Marty McFly, a teenager from 1985, accidentally sends himself to 1955 in the time machine his friend Doc Brown built out of a DeLorean, and requires 1.21 gigawatts of power to return home. After initial confusion, the 1955 Doc Brown agrees to help Marty get back home by striking his car with 1.21 gigawatts of lightning, giving Marty a week to make his parents fall back in love at a dance and put bully Biff Tannen in his place. He does it, and in the process invents rock 'n' roll and skateboarding.

For tropes found throughout the trilogy, like "Mister Sandman" Sequence, see the Franchise page, Back to the Future. For tropes specific to this film, see below.

It also tips Doc off that changing the natural course of time isn't the catastrophe he feared it would be, and he later tapes up and reads Marty's letter.