Comic Book / Back to the Future 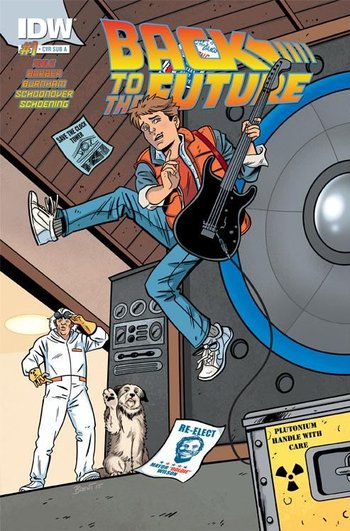 The first volume, "Untold Tales and Alternate Timelines," tells much of the characters' respective backstories, as well as scenes from the movie series shown from a different perspective. This volume comprises two stories in each of the first four issues of the comic, with each primary story featuring a Framing Device set in the Old West, and with Issue 5 being a Nested Story.

The second volume, "Continuum Conundrum," picks up five months after the end of Part III, featuring a new plot where Marty must investigate Doc's disappearance after receiving a letter from Clara, who sent the letter from 1893.

The comic series is co-written by the film series' co-writer and creator Bob Gale. It was originally slated for a limited run, until an overwhelmingly positive fan response prompted IDW to turn it into an ongoing series.

Biff to the Future